A very intelligent and wise woman, Dr. Wilson, pointed out a lack of citations to provide evidence for the loaded claims made by Supreme Court Justice Samuel “I Hate Women” Alito. I read the passage again with this insight in mind, and that is when I saw it. The old white supremacist language I was raised to speak and hear and understand.

For those who don’t speak fascism, racism, or bigotry in the deeply rooted systemic dialect, I would like to offer a translation.

The lack of citation to provide evidence for his claims is standard practice in the fascist dialect. It is often employed when in the act of committing or supporting evil. Simply, a claim is made and we’re supposed to assume it to be unerringly true—like they do with the Bible.

The phrase “enflamed debate” means their argument is inferior and the claim lacks the weight of merit. In short, they can’t get their way by reason or debate. This is where the phrase “deepened division” comes into play.

Division is a dog whistle to rally defense of something generally indefensible. We don’t call out Uncle-Brother Billy Joe Bob for his racism at Thanksgiving because it would cause division.

Division is the phrase pulled out when fascists no longer want to debate, they just want their way. An example of this is excusing grandma because she grew up in another time, and we can’t reason her out of it, so we just give her a pass so not to cause division.

Where else do you see this use of division to rob power from the people so that it may be used to uphold oppressive structures, systems, and institutions? If you guessed white evangelical churches, you would be solidly right.

Now why do you see that similarity? Well, it’s not coincidental. The relationship between the white evangelical church and white nationalism in America runs deep. While that goes beyond the scope of what I’m doing here, I would invite you to consider how many of these far right wing fascists claim to be Christians. Then, consider all the ways in which these Christians argue for legislation against abortion rights, the entire existence of the LGBTQIA+ community, the poor, and women.

I’m not proud that I can still read white supremacy, but I feel it imperative that I should make very plain what has actually been said here. I would also ask that we pay very close attention to which States enact bans on abortion, birth control, contraceptives, and abortion medication. They’ll probably be the same ones enacting legislation targeting the LGBTQIA+ community and their families. Probably the same ones that are Republican run. Probably the same ones that have a long history with racism/segregation/slavery/lynching. They will probably rank low in education and high in poverty. Probably have some voter suppression history there, too.

Again, this not the scope of this writing, but do take notice of the common connection. GOP, white supremacy, and white evangelical Christianity always seem to be found hanging out at all the same clubs together. Just saying. 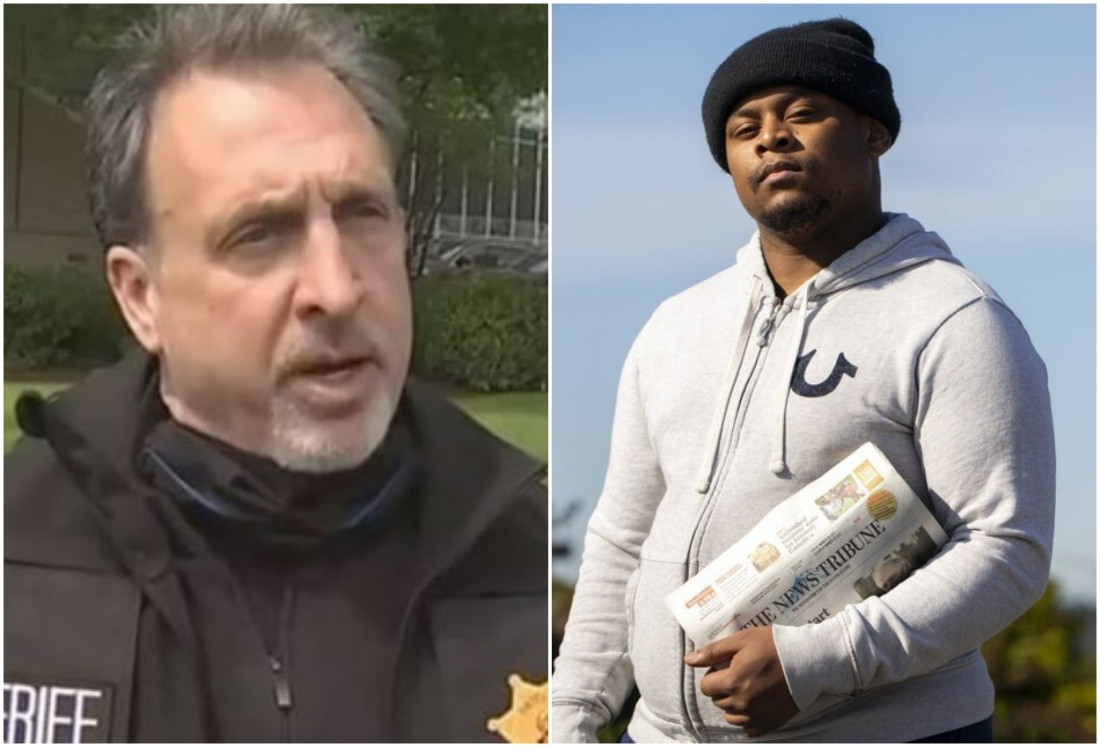 Over 40 Cops Arrive After a Washington Sheriff Falsely Claimed a Man Threatened Him.

I share these stories because we need to see how common this is. Racism isn’t in the past, but here and now. It is embedded in our systems and institutions. We can only change these things by voting out the powers that keep these racist systems alive and well.

It is not enough to simply vote out the enabling powers behind life crushing institutions and soul sucking policies; we must replace them with powers willing to transform those structures imbued with racial bias.

If Sedrick Altheimer had been killed, we wouldn’t be reading the story of a racist sheriff doing racist shit—we would be reading stories framing Altheimer out to be a criminal. He nearly became another name for us to say out loud.

Yes. Some will rightly claim this is just speculation, but let me point out a fact in this case—that sheriff isn’t behind bars. He made a call to clearly put Altheimer’s life on the line. The sheriff put out a distress signal to his fellow law enforcers that a badge was in danger. The sheriff intentionally manufactured a scenario which drastically increased the risk to Altheimer.

The sheriff walks. He might be sued, might lose his job, might go bankrupt—but he walks. A black man accused of some minor offense finds themself thrown behind bars to rot. But, the sheriff walks.

It doesn’t have to be this way. We can create a more equitable and free system, but it takes all of us stepping up to vote for real change. We must weed out those who continue to cling to the racially biased structures destroying our neighbors.

At the very least, we ought to demand a system in which even a sheriff is held accountable for attempting to have a man lynched.

Tiktok’s @jolly_good_ginger shared a video that resonated deeply with me. In fact, if he grew up in an abusive environment and was raised in a cult, I’d think we were the same people. I’m not as good looking as he, but there are some physical similarities. We are both veterans. We are both poetic. And, it seems, we both have a unique insight into race, racism, anti-racism, and the part we’ve played in this very American problem.

Like @jolly_good_ginger, I wasn’t raised around racists, I was raised by them. I was them. And by God’s grace I escaped them, and continue to escape them. It is why I speak about racism with white people. My privilege, my insight, my experience—but especially my whiteness—grants me an open door to discuss these dehumanizing issues with people who refuse to even listen to the “other.” Those who—as Toni Morrison once pointed out—would rather these awful, horrific, and detestable acts of evil against our humanity be kept “drawn behind the veil” to protect our sensibilities.

It is not just our fellow humans who look differently from us that we mistreat. No. Those that are different—whose religion, race, ethnicity, sexuality, identity, poverty (that is, their poorness), family make up, etc., etc., etc. are “wrong”—we treat with the utmost indignity.

Let me draw the veil completely open. That which I shame are the same things I practiced. I speak to white supremacy with intimate knowledge which no amount of propaganda can ever dissuade—which can no longer dissuade.

And before any accuse me of suffering from “white guilt” caused by “CRT,” as some who cannot even spell “CRT” have already accused me, let me offer this:

Repentance is the turning away from something—an act, behavior, habit, etc.—in agreement that the thing from which you repented is wrong. This boldness of bigotry and racism in the American 21st century is wrong—is evil—and if I say nothing, do nothing, then I am equally culpable in that evil. If I go on pretending not to notice it because it doesn’t “hurt me directly”—which it does—then my repentance is nothing and my growth as a human being is a sham.

Those who have experienced, and repented from, the side of the aggressor like @jolly_good_ginger and myself, have an obligation to speak up not only of the blatant racial and bigoted injustice that plagues America, but of the tactics and strategies used by whites to further sustain and uphold white supremacy.

Racism, and all the other prejudices borne out of white supremacy, is not solely the problem of its victims. White supremacy dehumanizes all of us—transforms us into animals and a means of profit for a system which benefits only a few. This problem is a problem for all of us.

The Adventure Church/Tower District battle in Fresno, California has been, and continues to be, a glaring example of evangelical Christianity’s relationship with white supremacy, colonialism, and American nationalism. There were a number of red flags in this situation from a moral, ethical, and theological perspective.

One problematic example which stands out is that particular cult’s relationship with the white supremacist group ‘Proud Boys.’ When the modern KKK comes to defend your cause, it would do well to review and analyze your cause. One might ask, “why is a hate group so interested in supporting me?” Or perhaps it would be worth the time to consider what a designated terrorist group finds so attractive about the church in question.

Secondly, Adventure Church’s hostility, belligerence, and cruelty demonstrated a behavior which might arguably be called ‘the spirit of the antichrist.’ At the very least, it appears to indicate an absence of Christ among both the congregation and its pastor.

For example, the excessively loud and obnoxious ‘Christian music’ blasted through oversized speakers to harass the homeless seems to be far from any sort of Christ-likeness. The unwillingness to love the community and the intentional injury caused to the Tower District’s community echo more the behaviors attributed to the Sadducees and Pharisees in the Gospel of Matthew than of Christ.

Honestly, I suspect the whole stunt was an attempt to follow through with a decades long wet dream of area wide evangelical (nationalist) churches to slip into the Tower District and clean it up “for GEEZUS.”

I don’t understand how the irony of Christian nationalists continues to baffle me, but it does. How in Christ’s name do they claim to be disciples of Jesus while actively doing ALL OF THE THINGS he condemned of the religious elite in the Gospels?

In short, the whole burning dumpster fire serves as another example of the generally Christless Christianity practiced by specific segments of American culture.

What hurts personally is that I think about how similar Adventure Church is to the cult in which I was brought up—Calvary Chapel. The same symptoms were, and frankly, are, present in that place. Elitism. Us vs. Them perspectives. Isolationism. Ends-Justify-the-Means public motivation. Dangerous indoctrination by uneducated, ill trained, and ill equipped individuals. Fascist and authoritarian sentiment and philosophy. Toxic masculinity. Fragile masculinity. Sexism. Mysogyny. The list of abhorrent similarities goes on.

The worst of it, for both Adventure Church and the cult I escaped, is all the suffering was caused “for geezus.” As if nailing Christ to a tree wasn’t enough.